The Firm By Nick Love - Buy On DVD

A new Film by Nick Love. Due for release this September 2009 and much talked about movie already is sure to be a box office hit. Loosley adapted from the cult like Alan Clarke short film made in 1989. 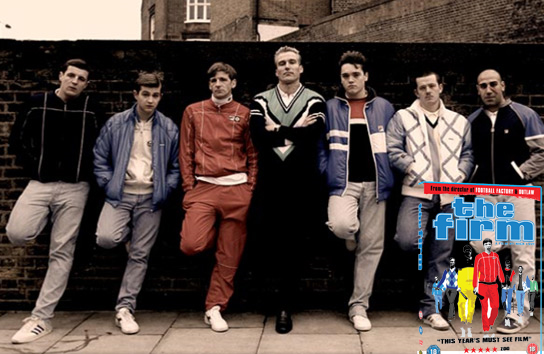 Nick Love has retold a similar story as to the original, but with a different character point of view. Set in the 80s a time when every self respecting young lad would be seen dead without wearing a Fila BJ tracksuit, or Sergio Tacchini track top- the film centres on Dom a young "wanna be" who aspires to become part of The Firm. Bex top boy in the Firm gives Dom the chance to be part of their clan. Dom realises that The Firm is more than he bargained for. Once your in its a lifetime membership with no expire date. Bex and boys clash with rival football fans all over the country and the violence spirals out of control. Dom wants out but will it be that easy?Watch The Firm this Febuary 2010 on Blu Ray DVD. Every detail has been perfectly co-ordinated by Nick Love, from the casual , smart clothing that includes Gabicci, Farah slack, Lois cords, Diadora Borg elites, Fila, Sergio Tacchini, Adidas and loads more to the Hair Cuts and jazz funk sound track.

If you like the film then you will love some of the casual clothing we have instore for you all this winter. Most of the re-makes on clothing and footwear used in the movie will be available to buy at www.stuartslondon.com